SP26R is a passive radiator intended for use as an alternative to the port in a bass reflex cabinet, together with an active woofer of similar size or smaller.

In many applications, the traditional bass reflex port may produce high speed air noise or even have poor effect due to a small port area or a large port length. In such cases, a passive radiator may bring about an improvement.

The chart below will show you the mass which has to be added to the cone of the passive radiator in order to obtain the desired Helmholtz resonance frequency in a given cabinet volume.

The passive radiator cone is equipped with an M4mm screw to which you can easily attach the added mass.

For optimum performance, the passive radiator should be mounted vertically (with horizontal cone axis). This is especially important when a significant additional mass is used. 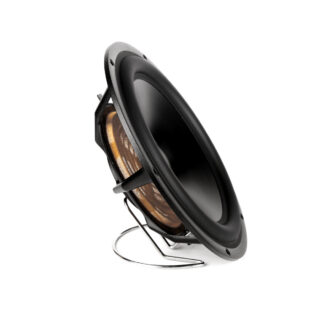